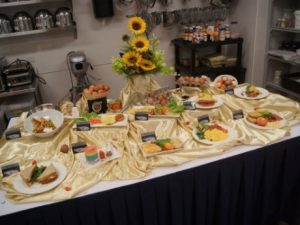 On 16 July 2016, APSN Delta Senior School collaborated with the Singapore Junior Chefs Club (SJCC) and the Singapore Chefs Association (SCA) to organise the inaugural Inter-School Culinary Challenge for specialised and special education schools . This initiative was an effort to create a platform for students in the Food and Beverage (F&B) vocational programme at APSN DSS and their counterparts in other educational institutions to showcase their knowledge and skills before experts and mentors from the industry.

This challenge was open to students aged 16 to 21 in all specialised and special education schools in Singapore that offer vocational training in F&B. Besides APSN DSS, the other schools that participated in this event include APSN Katong School, Metta School, Grace Orchard School, Mountbatten Vocational School, MINDS – Lee Kong Chian Gardens School as well as MINDS – Woodlands Gardens School. This competition served to build the confidence of students, deepen their interest in the culinary arts and assist them in forging relationships with their peers and mentors in the sector.

For this challenge, the qualifying and final rounds were conducted on the same day. A total of 10 teams (comprising two students each) from 7 schools, participated in this competition.

The panel of judges was made up of distinguished industry experts representing the SCA. They were Chef Toni Robertson (Chief Judge), Chef Derrick Lau and Chef Kiang Siang Heng. Gracing this event with their presence as well were MOE School Inspector, Ms Teo Siew Khim and Principal of Metta School, Mdm So Kah Lay.

In the qualifying round, students were tasked to use eggs as the core product of their dish and cook it according to their preferred style. Teams were timed throughout the preparation of their dish. They were then required to present their dish before the panel of judges. The judging criteria focused on the areas of hygiene, workflow, timing and creativity in the presentation of food. Four teams (in no order of merit), from Metta School (Team B), APSN Katong School and APSN DSS (Teams A & B), were selected to advance to the final round.

For the final round, the judging criteria included an emphasis on the use of eggs as the main ingredient as well. However, this time, the panel of judges also presented two “mystery” ingredients to each of the four teams, which had to be incorporated in the preparation of their final dish.  Teams were given 75 minutes to prepare, cook and plate their dish before presenting it to the judges. APSN DSS Team B and A were placed fourth and third respectively. The team from Metta School was declared the first runner-up whilst the team from APSN Katong School took home the title of “Star Performers” (Champions) of the Inter-Specialised / SPED Schools Culinary Challenge 2016.

The level of perseverance and self-determination observed amongst the participants was indeed admirable, leaving everyone who were present at this event in awe. Having prepared for this challenge through their relentless hard work, students reaped the fruits of their labour at the end of this competition as every one of them walked away with awards.