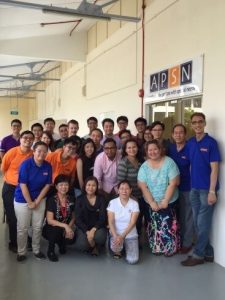 On 23 April 2016, an inaugural APSN volunteers’ appreciation day was organised to thank active volunteers and corporates for their support for the organisation.

The event was graced by APSN President Mr Chan Chee Keong, who opened the event with an appreciation speech. Alongside him, APSN CEO, Mr Kenneth Tham was also in attendance to present the appreciation medal and plaques to the volunteers and corporates.

The programme proceeded with a bingo game to embrace the unity amongst the volunteers and thereafter buffet lunch which allowed further networking and building of rapport. Once again, APSN would thank all the attendees and look forward to everyone’s participation and support for an eventful year ahead in transforming lives and inspiring change.

Catch the last game of the season and the main highlight on the S. League's…